A New and Improved Way of Using Carbon Fiber

For some time now carbon fiber manufacturers have been in search for a new ergonomically way to manufacturer carbon fiber to make more complex pieces.  Finally 2 large players in the industry, Lamborghini and Callaway teamed up to begin developing this new material.  The outcome was something called Forged Composite, which can already be seen in many of Callaway’s golf clubs and the Lamborghini Sesto Elemento concept car as well as some of their new production cars.

Usually carbon fiber products are made by laying several CF sheets on top of each other and using a type of resin to impregnate the fibers which will eventually harden to create a particular shape.  Forged Composite is a paste like material that is infused with over 500,000 turbostrastic fiber per square inch which is then mixed with a resin.  This way the new composite material can be squeezed out to take on any shape.  Making those most difficult CF products a trouble of the past.

After creating this new carbon fiber composite material Callaway was able to develop a new line of drivers called the Diablo Octane.  With this breakthrough, Callaway states that these new clubs will over power any club made out of titanium.  With such a drastic change in the weight to power ratio they estimate it will be able to drive a ball an average of 8 yards further.  After further studies and testings they were able to get this new composite golf club to weight in at a third less then their typical titanium drive; eventually fading out the entire titanium line of clubs all together.

While Callaway was doing some in depth market research, they found that customers liked the “less is more” approach to this club.  In response Callaway decided to leave the clubs raw and have the Forged Composite show through, adding an aggressive touch.

Lamborghini’s first vehicle to use this new Forged Composite was the Sesto Elemento concept car.  Where they utilized it in both the monocoque chassis as well as the suspension arms.  Since then all of their production cars have new been using it, like the new Aventador and Huracan.

Although this new composite material may not be as appealing to the eye as traditional carbon fiber, its potential applications is very exciting to carbon fiber enthusiasts.  With less labor needed and a lower cost for making more difficult applications, who knows where we might be in the years to come. 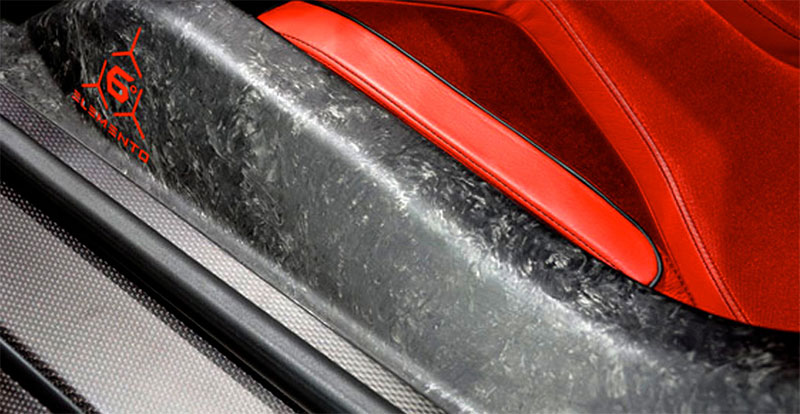 If you have any further questions about forged composite please email RW Carbon at info@rwcarbon.com